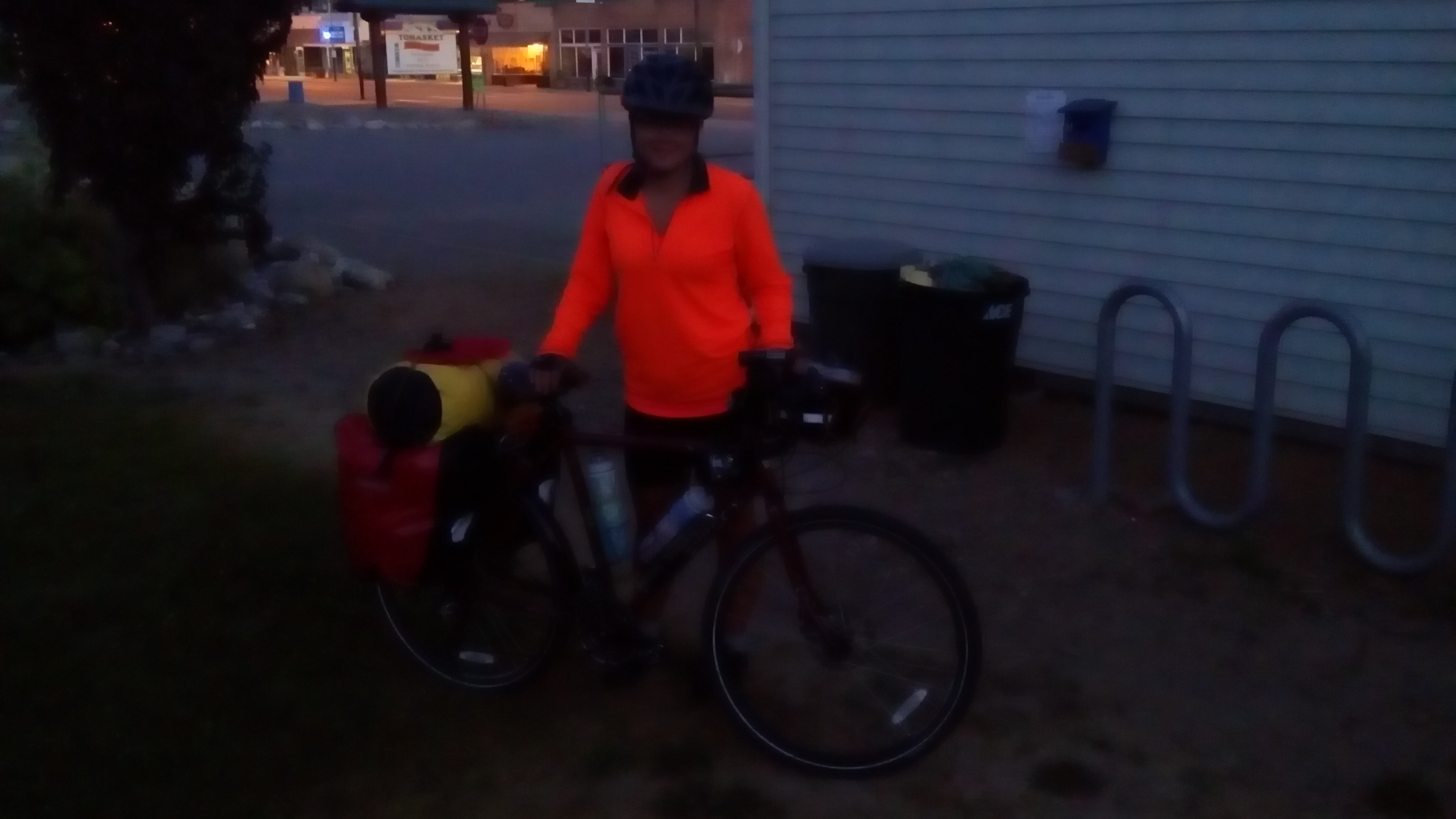 I traveled about 77.9 miles today.
This (blurry) picture is of Jo, the cyclist that I met in tonasket. Really fun person to meet, and an incredibly early riser. She was on the road at quarter to five, a full hour before I left. Color me impressed. I also met Bruce last night, a glass artist who lives near tonasket, and a second Linda, who runs the Esther Bricques winery a little north of tonasket. Good ride today over Loup Loup pass, lots of climbing, but some fun downhills. It must be tough starting out in these mountains on a west to east trip. I saw a mountain lion today! As I was going down a small hill before starting to slog up the pass, I saw what I thought was a fox run onto the road. I wicket realized that it was farther away and lots bigger than I thought at first. I stared braking, and gave a loud YELL! I don't think it had noticed me before, because it swung it's head around pretty quickly, and then ran back the way it had come, slinking under the guard rail on the side of the road. Not something I was expecting to see. I practiced my yelling a few times in the next several miles. I can be really loud of I decided to, turns out. So that's my story of scaring away the Loup Loup Lion. Got to Winthrop a little after noon, I made good time. Got some groceries, had lunch and a beer at the old schoolhouse brewery (and got another sticker!), the went to the library to catch up on email and plan next steps. I'm strongly considering taking the bus or train from Seattle to Portland instead if biking, since I wouldn't even be on the coast for that stretch, and there isn't a great route between the two cities. Meeting up with a friend this weekend to bike in the San Juan islands. Very excited about that. Just one more pass to conquer tomorrow, then I'll have an easy day to meet up with him in Anacortes the next day. Staying between Winthrop and Mazama at the bicycle barn, a campsite set up by a family specifically for cyclists. Guess who I ran into when I arrived? Cadence! A welcome surprise, and great way to end the day.
Posted: 20:31 07-21-2016 111
Previous Post     Next Post
archives: 2019 2016
Site Disclosure Statement
Tweet

Comments:
Jul 27, 2016 - Santhosh
Very interesting blog. Many blogs I see these days do not really provide anything that attract others, but I am most definitely interested in this one. www.platooh.com