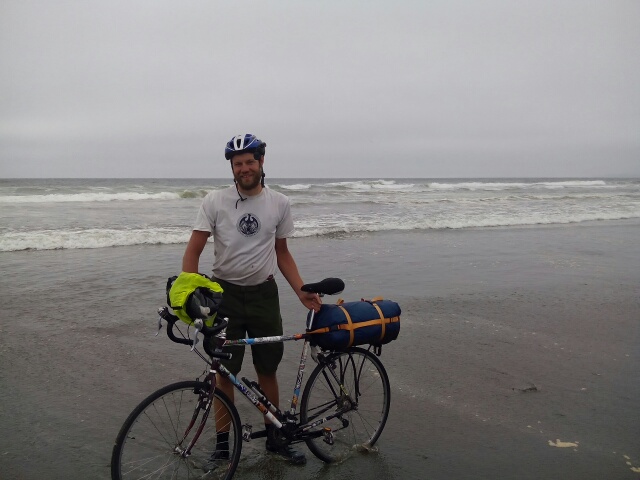 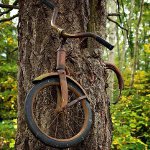 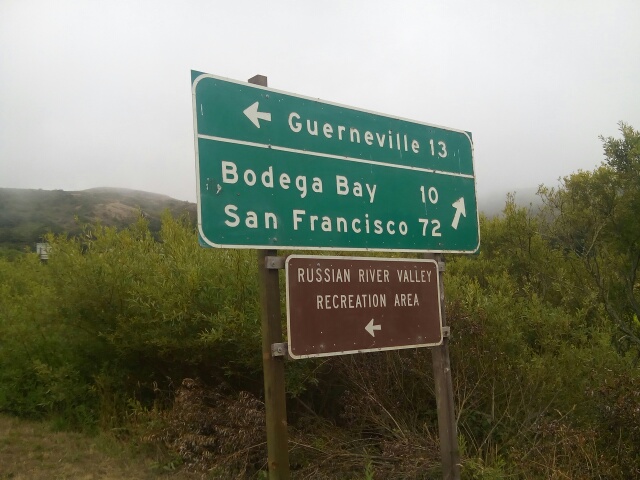 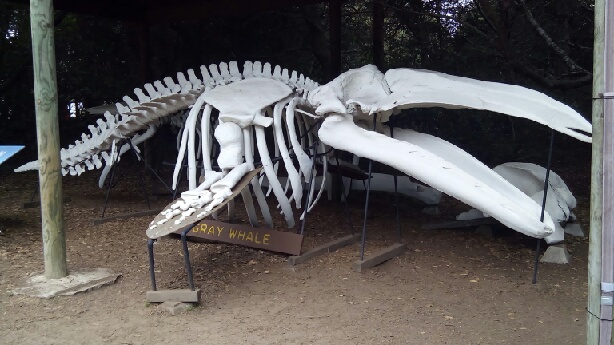 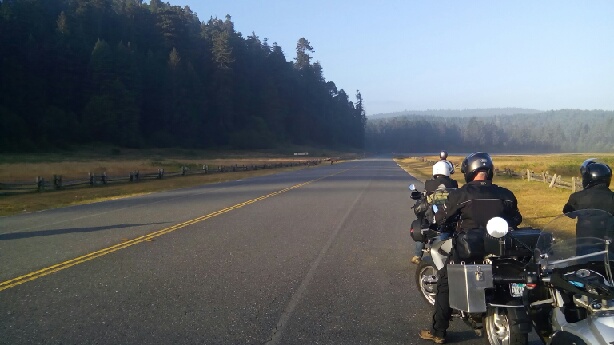 I completely forgot to mention this last night, but yesterday morning, just as I was leaving the elk prairie campground, I came across some bikers (the other kind) watching two elks having a kind of standoff/fight. Really cool to see. We eventually rode past. The motorbikes kind of made the elks back off a little, and I able to use a passing car for some cover, but it was still a little nerve wracking passing by. All is well, though. I don't think they were worried about us infringing on their territory.
Leave Comment
Posted: 08/01/2016
07/31/2016
A Tree Ate My Bike! 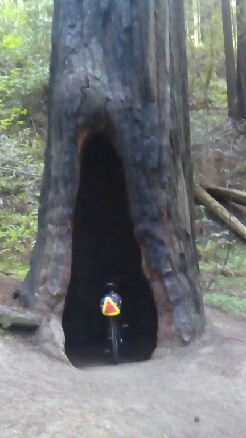 I traveled about 98.7 miles today.
Had a decision point in Eureka today, after biking the fifty miles there from camp. Would I push on to the campground eighty miles away and do two more big century days to get to SF a day earlier, or would I reign myself in and start doing eighty/ninety mile days? I decided that I didn't want to push myself to hard, so I headed to the campground that was 'only' another 45 miles from Eureka. First, I planned out places to stay the next few days, and called up the state parks where I was planning to stay, to confirm that they have hiker biker sites. I also stopped at subway for lunch, and possibly my new favorite grocery store, Winco. They have pretty darn good prices, and bulk food (like banana chips and trail mix) that you can get however much or little as you want. The last fifteen miles to camp were along the avenue of the giants, a scenic alternate to 101 that winds through redwood forests. My campground in right in the middle of the forest, it's pretty incredible. Met up with Stewart and Alison at camp, also Mike and Katie who I had passed on the road. Teresa came into camp a while later. Glenn, a camper in a nearby site, brought over some beer for all the bikers. He owns a bike shop in Santa Rosa. What a guy! I've started seeing signs for San Francisco. They went from over three hundred miles to under today. Things are coming to a close very soon, but I still have many miles to travel. The redwoods are fantastic, really happy to be camping here tonight.
Leave Comment
Posted: 07/31/2016
Hat trick
I traveled about 113.4 miles today.
I don't know if there is a cycling version of a hat trick, but three century days in a row seems like it should count for something. Saw the rest of the Oregon coast, really great stuff. Entered California, stopped for a bit in crescent city to charge the phone and switch my tires, front to rear. Decided to push on another thirty miles to prairie creek campground. Had an incredible ride through some redwood forest, there are really big trees here. Met Frank and Mika, then David, on my way to camp. They all made it too, which was good. Lots of people here, too many to meet them all. Funny coincidence, David, Frank, and Mika are all from Boston. Need to stop by Eureka tomorrow, get some food, new batteries for the spot. I'll probably continue on to a campground further along afterwards. If I can keep this up, I should be able to get to SF a day earlier than I had planned. I'm super motivated by finishing this trip at this point. It's not that I want it to be over because I'm not enjoying it. It's that extra bit you give when you can see the finish line up ahead. That, and I'm daydreaming about crossing the golden gate bridge and finally dipping my wheels in the Pacific. I'm just really excited for that to happen.
Leave Comment
Posted: 07/31/2016
07/30/2016
Biking Journal
Yesterday, there were a bunch of messages in chalk along seven devils road. They were really funny, and kind of made my day. Saw a big group of bikers ride out of camp this morning a little before I left. Caught up with them within a few miles, they weren't moving very fast, I guess. Turns out, they were the ones who had written those notes. Cool guys, maybe they'll catch up with me if I take a break in crescent city.
2 comments     Leave Comment
Posted: 07/30/2016
Biking Journal
I traveled about 124.1 miles today.
Camping at humburg mountain state park tonight, a few miles south of port orford. Had a great day, saw some amazing sights along the coast. Heading to crescent city tomorrow, possibly farther. Met a few people today: biked a little with Evan from Boston who knows some Olin people. We ended up camping in the same place. He bought a bottle of beer in town, and shared it with me and Pavall, another biker Evan had met earlier. We're also joined by Steven, who arrived at camp just as the sun was setting. Very funny guy, lifts the spirits of everyone he's around. I don't want to wear myself down too much, but it feels good making so much progress these past two days. Also talked with Russ, the camp host, when I arrived. Cool guy, very outgoing and interested in other people's stories.
Leave Comment
Posted: 07/30/2016
07/29/2016
Biking Journal
Camping at Carl Washburn park was great. I could hear the gentle roar of continual waves crashing against the shore as I feel asleep at night and woke up in the morning, while gazing at the broken canopy of pine trees. Headed out a little after 7am before the others woke up. They were all just starting their adventures, and I think are taking a more leisurely approach, especially in they first week or two. Arrived in Reedsport a little before 10. Stopped at farmers market and bought small lemon poppy seed loaf (a nice mid morning snack) while I waited for the library to open. Heading at least to port orford today. If I get a good wind boost, I may push on to Brookings. We'll see what happens.
Leave Comment
Posted: 07/29/2016
Older Posts               Newer Posts
Site Disclosure Statement
Tweet